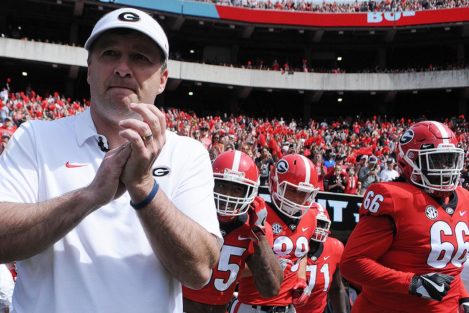 The gap between the SEC and the other Power 5 conferences might not be as big as it once... 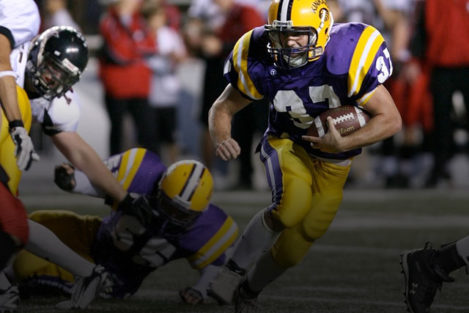 Archived: Hank has the 3 BEST BETS for College Football Week 1 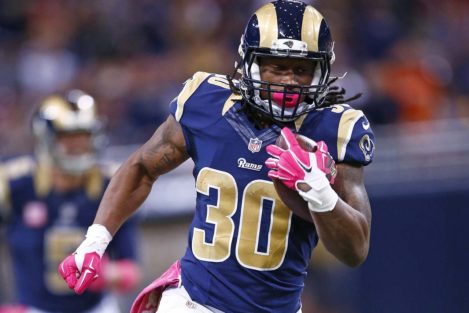 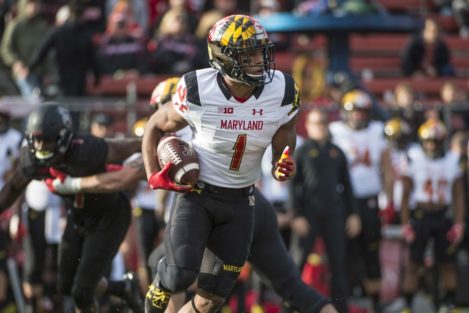 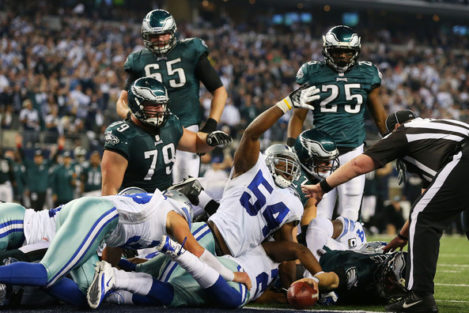 When it comes to NFL Picks Hank Petrello’s Network is one of the more sophisticated... 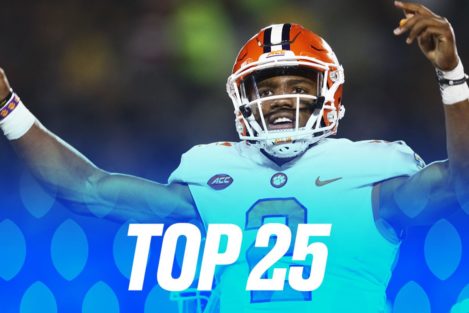 The 2018 college football season is less than 40 days away, but it’s never too early...

The gap between the SEC and the other Power 5 conferences might not be as big as it once was, but it’s hard to argue that there’s a better conference from top to bottom in the country.

Last year the SEC became the first conference to send two teams to the playoffs, since the new format was introduced in 2014. Georgia was an obvious choice after they beat Auburn in the SEC Championship Game. Alabama snuck in as the 4th and final team, despite not winning their own division.

The Crimson Tide rolled over Clemson 24-6 in their semifinal matchup, while Georgia rallied from a 31-14 deficit to stun Oklahoma 54-48 in double-overtime.

That set up an all SEC title game between Alabama and Georgia. The Bulldogs had the Crimson Tide on the ropes (led 13-0 at half), but couldn’t finish the job. Trailing by 3 in overtime and facing a 2nd and 26, Alabama connected on a 41-yard game-winning touchdown to win 26-23.

The SEC has now had a team win the National Championship in 9 of the past 12 seasons.

Looking ahead to the 2018 campaign, there’s a number of teams who are going into the season with expectations of not just winning the conference, but being the last team standing in the College Football Playoff.

With that said, there’s one team that everyone has their eyes set on beating and that’s Alabama. The Crimson Tide are responsible for each of the last 5 national championships from the conference, all of which have come in the last 9 years.

The ongoing challenge of trying to catch Alabama in the SEC has made it difficult for several head coaches to keep their job. This year there are 5 different schools who are going to be in the first year of a new head coach and only four have a head coach that has been with the program for more than two seasons.

The biggest hire in the SEC was at Texas A&M, as the Aggies were able to lure away Jimbo Fisher from Florida State. The other big hire came from a head coach switching programs, as Dan Mullen left Mississippi State to take over at Florida. The other three new hires are Chad Morris (Arkansas), Joe Moorehead (Mississippi St) and Jeremy Pruitt (Tennessee).

Now comes the tough part of trying to project how the conference will play out in 2018. Below are my predictions on where I see each team finishing in the standings for the upcoming season. I’ve also included some future odds for each team to win their respective division, as well as the conference.

One thing you can do with my overall predictions is compare them to the over/under season win totals. You can also get a head start on the upcoming betting season and check out the early Week 1 odds.

Alabama is the overwhelming favorite to win the SEC West this year and for good reason. The Crimson Tide have won the division outright 4 times in the last 6 seasons and the two times they didn’t win they tied for the best record in the SEC West. You have to go back to 2010 to find the last time Alabama lost more than one regular-season conference game.

Sure the Crimson Tide lost a ton of talent from last year’s national championship team, but no team in the country reloads like Alabama. They got 5* recruits just waiting to get their shot, so there’s rarely a significant drop-off in production. This year the Crimson Tide have 7 starters back on what has the potential to be one of the best offices the school has ever seen. The only question is whether it’s Jalen Hurts or Too Tagovailoa at quarterback. As for the defense, they only have 3 starters back and lose defensive coordinator Jeremy Pruitt (head coach Tennessee), but will still be one of the best units in the country.

The real debate in the SEC West is who has the best shot of taking down Alabama. Most will argue that it’s Auburn, but I believe it to be Mississippi State. If not for Mullen packing up and going to Gainsville, I think a lot more people would be on the Bulldogs this year. However, I’m really high on Moorhead, who went 38-13 in 4 years at Fordham and excelled as the OC at Penn State the past two seasons. The Nittany Lions averaged 23.2 ppg in 2015. In Moorehead’s first season they averaged 37.6 and last year put up 41.1 ppg

The other key for the Bulldogs is the talent they have coming back. Mississippi State will be one of the most experienced teams in the country with 17 starters back (9 offense, 8 defense), including a legit Heisman candidate in senior quarterback Nick Fitzgerald. A road game at Alabama on Nov. 10 could very well decide the SEC West.

Why am I not higher on Auburn? The main reason I’m down on the Tigers is their schedule. Not only do they have to open the season with a neutral site game against Washington (legit playoff contender), but they have to play Mississippi State, Georgia and Alabama on the road. All 3 of which will be out for revenge from double-digit losses last year. It’s also worth noting each of the last two times Auburn posted a double-digit win season (2010 & 2013) they went just 8-5 the following year.

The big ‘Wild Card’ in the SEC West has to be Texas A&M. The Aggies never reached their full potential under Kevin Sumlin. Texas A&M brought in excellent recruits during Sumlin’s tenure, but only won 10+ games once in the six seasons with him in charge. We know what Fisher can do with talent from his time at Florida State, but can he work his magic in his first year on the job. There’s a chance with 16 returning starers, but 4 road games against Alabama, South Carolina, Mississippi State and Auburn, plus a non-conference showdown with Clemson make it unlikely we see the Aggies rise to the top in 2018.

My biggest surprise in the SEC West isn’t a team coming out of nowhere, but a powerhouse taking a major step back. I think LSU is in for one of their worst seasons in recent memory, as I have them going just 2-6 in the SEC and missing out on a bowl at 5-7. I’m simply not a believer in Ed Orgeron and the Tigers only have 10 starters back from a team that doesn’t recruit quite like it use to (0 first round picks in this year’s draft).

It’s a bit surprising that Arkansas failed to take that next step under Brett Bielema, but I don’t blame the Razorbacks for changing things up. Morris, who made a name for himself as the OC at Clemson, quietly did a fantastic job in his three years at SMU. Morris took over a team that had gone just 1-11 and averaged 11.1 ppg. In his final season with the Mustangs they went 7-6 and put up 37.8 ppg. With 17 starters back, Arkansas could be one of the most improved teams in the country.

That leaves Ole Miss at the basement of the SEC West. The Rebels are a prime example of how quickly things go bad. Just a couple of years ago this team was competing for division titles and looked primed to stay a contender. The off the field stuff, including a self-imposed ban last year has taken a lot of the fight out of this team and several players have transferred out of the program, including star quarterback Shea Patterson. Just winning a conference game could be a struggle, as their 4 SEC home games are against Alabama,. Auburn, South Carolina and Mississippi State.

Most are just going to assume that Georgia will repeat as SEC East champs, given what they were able to accomplish in just the second season under head coach Kirby Smart. There’s no question that the Bulldogs will be in contention for the top spot in the East, but I think they come up just short of repeating.

My pick to win the division is Florida, who I think made a slam-dunk of a hire in Mullen, who didn’t get near the respect he deserved for what he was able to get out of the talent he had to work with at Mississippi State. He goes from having to groom lesser recruits in Starkville to fine-tooling 5* recruits in Gainesville.

A lot of people forget how bad this Gators team was hit last year with suspensions and injuries. At one point they were down 28 scholarship players. This year they have 19 returning starters, making them one of the most experienced teams in the country. I’m willing to bet Mullen stays true to form and gets the most out of this team. While I have them losing to Alabama in the title game, I wouldn’t be the least bit surprised if they won the SEC and made the playoffs.

Outside of Georgia and Florida, the only other team that looks like a potential contender in the East is South Carolina. Say what you want about the job Will Muschamp did at Florida, he’s been outstanding in the two years with the Gamecocks. He’s now in year three at South Carolina and will have his best team yet with 14 starters back.

The rest of the division is pretty much a crap-shoot. A lot of people will be high on Missouri because of all the talk of quarterback Drew Lock being a potential 1st round NFL draft pick, but I’m not convinced this team has the talent to compete with the big boys in the SEC this year. They did go 7-6 last year, but really took advantage of a soft schedule and laid it on some weaker teams.

The one team outside of the top 3 that could surprise is Kentucky. The Wildcats have went to back-to-back bowls and will return 15 starters, including one of the best running backs in the country in Benny Snell. Whether or not that happens will come down to what they get out of JUCO transfer Terry Wilson, who is expected to start at quarterback.

The Volunteers are similar to the Aggies from the West. Tennessee stockpiled top recruiting classes in the 5 seasons under Butch Jones, but weren’t able to turn that talent into a legit contender in the SEC. Unlike Texas A&M, the Vols weren’t able to land a proven talent at head coach. They are instead hoping Pruitt can have the same kind of impact that Kirby Smart has had at Georgia, who went 8-5 in his first year and in year two had them playing for a national championship.

That leaves Vanderbilt, who simply hasn’t been the same since James Franklin left for Penn State. No disrespect to current head coach Derek Mason, but it’s just hard to compete in the SEC with the kind of talent gap that there is between the Commodores and the other teams in the conference. Home games against Tennessee and Ole Miss, as well as winnable road games against Kentucky, Arkansas and Missouri give Vandy at least hope they can sneak back into a bowl game.

Be Sure to Check in Weekly for Hank’s College Football Picks!