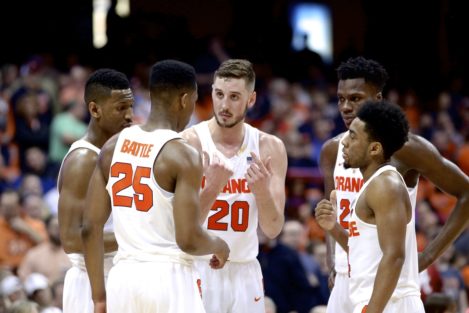 Hank is on fire during March Madness. His Guaranteed Highroller Club Selections are now...

— Bill Self’s club has won five consecutive games since getting blasted 82-64 at Oklahoma State in its regular-season finale. KU covered the spread in the first four games of the winning streak, but Seton Hall hit a meaningless (or not!) buzzer-beating 3-pointer to post a backdoor cover as a 4.5-point underdog in its 83-79 loss to the Jayhawks in the Round of 32.

— Kansas fell behind No. 16 seed Penn by double digits in the early going of Thursday’s first-round game, only to recover and take a seven-point advantage into halftime. The Jayhawks would go on to collect a 76-60 victory and take the cash as 13.5-point favorites. Devonte’ Graham torched the Quakers for 29 points, six rebounds, three steals and six assists compared to just two turnovers. Lagerald Vick had 14 points, while Mitch Lightfoot added nine points, 11 boards and three blocked shots.

— Kansas has been a single-digit favorite 16 times this year, posting an 8-7-1 spread record with three outright defeats.

— If KU can advance past Clemson, it will have another ACC team waiting for it in the Midwest Region finals. The Jayhawks faced one ACC team in the regular season and it was potential Sunday opponent, Syracuse. This game was played down in Miami at American Airlines Arena on Dec. 2, with KU knocking off the Orange 76-60 as a 9.5-point ‘chalk.’ Graham dropped 35 points on the ‘Cuse, burying 7-of-13 launches from downtown. Vick had 20 points, eight rebounds, seven assists and two steals.

— Graham is KU’s unquestioned leader who paces his team in scoring (17.4 points per game), assists (7.5 APG), steals (1.6 SPG), minutes (37:38 MPG) and free-throw percentage (83.3%). Mykhailiuk averages 15.0 PPG and has hit 45.5 percent of his 3-balls, while Newman (13.4 PPG) has made 40.9 percent of his treys and 82.8 percent of his FTs.
— Clemson (25-9 SU, 19-12 ATS) is taking advantage of its first NCAA Tournament appearance since 2011. The Tigers are back in the Sweet 16 for the first time since 1997 and only the fourth time in program history. They made their only Elite Eight in 1980, getting denied in 1990 when Tate George’s buzzer beater from the baseline off a length-of-the-court pass beat Cliff Ellis’s team that included Elden Campbell, Dale Davis and Marion Cash, a point guard from the Bronx. Clemson is still seeking its first Final Four appearance in school history.

— Clemson came into the Tournament riding a 3-5 slump both SU and ATS in its previous eight games. However, Brownell’s squad has taken advantage of its fresh slate by defeating New Mexico St. and Auburn. The Tigers captured a 79-68 win over the Aggies this past Friday as 3.5-point favorites. They led by 12 at halftime and by as many as 17 points in the second half. Shelton Mitchell was terrific with 23 points, three rebounds and five assists without a turnover. Mitchell hit 8-of-13 FGAs, 2-of-3 treys and 5-of-5 FTs. Gabe DeVoe made 10-of-15 FGAs in a 22-point effort, while Marcquise Reed contributed 15 points, seven rebounds and three steals.

— In the Round of 32, Clemson dealt out a pimpslap of epic proportions to Auburn. Brownell’s team led 43-19 at intermission and coasted to an 84-53 victory as a 1.5-point underdog. DeVoe was the catalyst with 22 points, five rebounds and five assists. The senior guard buried 6-of-9 launches from downtown and 8-of-13 FGAs, while Elijah Thomas produced 18 points, 11 rebounds and three blocked shots. Reed finished with 16 points, seven boards and three assists, while Mitchell had 10 points, six boards and six assists.

— Clemson has posted a 6-4 spread record with four outright victories in 10 games as an underdog.

— When these teams met on Feb. 24 at Cameron Indoor Stadium, Duke pulled away for a 60-44 win as a 14-point home ‘chalk.’ The 104 combined points easily glided ‘under’ the 143.5-point total. Marvin Bagley III scored 19 points and grabbed seven rebounds to lead the Blue Devils. Wendell Carter Jr. finished with 16 points, 10 boards, four assists, four steals and a pair of blocked shots. We will note that Grayson Allen went 0-for-6 from downtown against the ‘Cuse’s zone defense. Tyus Battle had 12 points, four boards, two assists and two steals for the Orange in the losing effort. Frank Howard contributed 11 points, seven assists and three rebounds.

— Syracuse won the lone encounter between these adversaries last season and in 2016. The ‘under’ is 3-1 in past four head-to-head meetings.

— Mike Krzyzewski’s club is 9-2 both SU and ATS in its last 11 games, including a pair of spread covers in the first weekend of the Tournament. Duke bested Iona 89-67 as a 20.5-point ‘chalk’ in the opening round behind 22 points and seven rebounds from Bagley. Trevon Duval added 19 points and eight assists, while Allen and Gary Trent Jr. scored 16 points apiece.

— Duke thumped Rhode Island 87-62 as a nine-point favorite in the Round of 32. All five starters scored in double figures led by Bagley’s 22 points and nine rebounds. Trent added 18 points, five rebounds, three steals and four assists compared to only one turnover.

— Duke has lost in the Sweet 16 round in eight of its last 13 region-semifinal games. On the flip side, Boeheim and the ‘Cuse have three straight Sweet 16 games.

— Jim Boeheim’s squad is 5-1 both SU and ATS in its last six games. Starting with its First Four win over Arizona State last week, the combination of Syracuse and the ‘under’ was a parlay casher in all three of the Orange’s Tournament wins. Those three ‘unders’ had combined scoring outputs of 108, 109 and 116 points.

— Syracuse (23-13 SU, 17-17 ATS) beat ASU 60-56 as a 1.5-point underdog in Dayton to earn a shot at sixth-seeded TCU in Detroit on Friday. The Orange defeated the Horned Frogs 57-52 as a 4.5-point underdog, forcing Jamie Dixon’s club into an abysmal 3-of-17 shooting night form beyond the arc. That’s Boeheim’s zone paying off, as his long defenders can effectively contest smaller shooters camped out behind the 3-point line. Marek Dolezaj led the ‘Cuse with 17 points, while Oshae Brissett contributed 13 points, nine rebounds, three blocked shots, one steal and one assists without committing a turnover.

— Syracuse followed up the TCU win by stunning Michigan St. 55-53 as a 10-point underdog, hooking up money-line backers with a +500 return. The zone defense did a number on the Spartans, who made merely 17-of-66 FGAs (25.8%) and scored only 53 points despite grabbing 26 offensive rebounds. Tyus Battle scored 17 points on 9-of-10 shooting from the FT line, while Brissett finished with 15 points and nine rebounds. Frank Howard had 13 points despite fouling out with nearly six minutes remaining.

— Syracuse is 7-3 ATS with six outright wins in its past 10 games as an underdog.

— The ‘under’ is 20-14 overall for the ‘Cuse after cashing in four straight games.

— Duke has had only one total lower than 143 points this year. That was the 134-point tally in its 65-63 home loss to Virginia that saw the ‘under’ prevail with the 128 combined points.

— These schools have squared off in the NCAA Tournament twice. In the South Region final of the 1966 Tournament, Duke won by a 91-81 count over a team that Boeheim played on. Then in the 1998 Tournament, I was at The Trop in St. Petersburg to witness Duke’s 80-67 victory as a 13-point favorite. Elton Brand and Shane Battier led an 11-0 run to break a 49-49 tie and the Blue Devils held on to win.